In part 1 I wrote about what can be considered a guide on a number of post-migration steps to be done before starting with decommissioning of the Legacy Lync 2010 infrastructure, in this article I will be writing on the steps of removing and uninstalling of the legacy Lync 2010 servers.

Some cases you get error when trying to run this command, the workaround is to close the PowerShell session and start a new one and try again.

We are getting close now to finish the uninstalling process, hang in there 🙂

NOTE: Archiving & Monitoring data are not moved to Lync 2013 infrastructure, make sure to back up the data before going ahead and decommission the roles

Without removing the association to the Archive or Monitoring server (If you have them deployed) you will not be able to remove the frontend servers / pool from the topology, also don’t forget about the SQL store 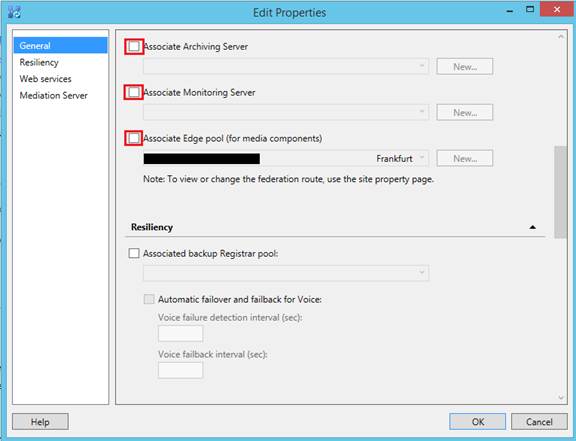 Now log into the Archiving & monitoring servers, run the Lync deployment wizard, click on “Install or update Lync server system” then click on step:2 Setup or Remove Lync Server Components and this will uninstall the Lync role running on the server.

Remove Association to the Trunks & Gateways

If you have Enterprise Voice deployed and associated Trunks to the Frontend server (in case Mediation server is collocated), or to a standalone Mediation server, you must remove the associated trunks to be able to remove the server, this is allowed only or done by removing the Gateway itself which automatically removes the trunk (Hope that you planned that ahead 🙂 )

This parts applies to most of Lync 2010 roles as in Frontends, Standalone Mediations, Directors, Edge, Archiving and Monitoring servers, once you removed the association to other components in the topology of those roles,

You can delete them from the topology, I’ll write about Frontend Standard edition, but this applies to most of them.

Don’t publish the topology yet 🙂 go to next part

Wait a minute for the replication to take place, if you don’t want to wait from a PowerShell run the following cmdlet

Now you can log into the Lync 2010 Frontend server and start the uninstallation process same way you did with Archiving & Monitoring stated above.

With Mediation Server, Director you do the same, remove them from the topology, publish the topology, wait for replication then login to the servers and start the installation wizard to remove the roles.

in case of Edge server, you need to remove it from the topology, publish it and make sure that the replication reached the Lync 2010 Edge server, if not then export the configuration as a zip file using following cmdlet

Congratulation your infrastructure is now running on Lync 2013 server only, welcome to the club 🙂